Some time ago, I posted a chart looking at how UK GDP divides up (I wasn't the first).  Chris Dillow has done the same.  He observes that "The wage share was unusually high in the mid-70s, and the profit share unusually low. It is, therefore a little misleading to speak of changes in income distribution since the mid-70s. Profits then were so low that they either had to rebound or capitalism would have collapsed." and "Since the mid-90s, the wage share has risen and profit share fallen."

Here's my almost identical version of Dillow's chart.  It's perhaps a trifle inconsistent of him to complain about the use of the mid-70s as a start point when his choice of the mid-90's is also unrepresentative: 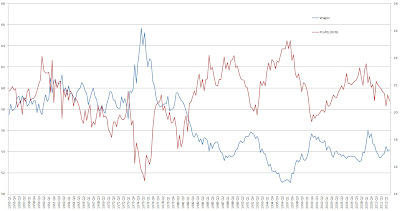 My attention was drawn to this by a commentator on Richard Murphy's site, who had the temerity to cite Dillow's analysis that "Since the mid-90s, the wage share has risen and profit share fallen".  Murphy's reply is customarily brusque "Just add a trend line I suggest. Do and it glaringly obvious the claim he is making is just wrong" (and gets ruder after that).  He's making a testable claim, and I like to think of myself as an obliging sort of a chap, so I asked Excel to draw trend the lines.  In an attempt to be neutral I chose Q1 1996 as "the mid-90s", without looking at the data first.  Here's the result: 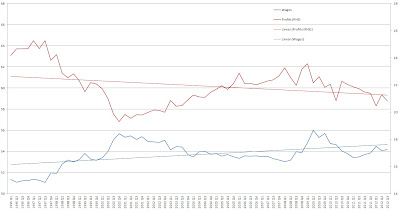 If drawing trend lines makes anything obvious, it's that since the mid-90s the wage share has risen and the profit share has fallen, just as Dillow asserted.

In turn, my attention had been drawn to Murphy by his brief appearance on the radio news, complaining that Starbucks' concession on corporation tax won't do.  He's right.  My brief thoughts on the issue are:
__

Update: I may have been too quick to agree with Murphy.  Starbucks' UK managing director says they are going to pay UK corporation tax based on not paying royalties, and on buying coffee beans at cost.