There are two policies I advocate to get tough on the causes of riots.

a) Legalize drugs.  Gang culture thrives when stuff people want (alcohol, lotteries, drugs...) is made illegal.
b) Get serious about reducing long-term unemployment.  It disengages people from society (even, or especially, young peoploe facing the prospect of it.).  There are far too few jobs now for unskilled labour.  The way to fix this is to subsidize jobs.  We need a negative income tax for low paid workers.

(a) is almost unanimously agreed among the sort of people who like to talk about this stuff without actually being responsible for it (like me).   I reconsidered it last year when a colleague died in a fall after taking cocaine, leaving a wife and young child.  I would expect legalizing drugs to lead to more people taking them.  Against this, the composition would be much better controlled.  We accept the health risks of alcohol: anything which is not clearly more dangerous should be legal (I suspect that cocaine would not qualify: this is a question to be determined scientifically).

(b) is rather more daring.  I'll write some more about it.

I was struck by this statistic in a Spectator article about the riots, written by Harriet Sergeant


A full 63 per cent of white working class boys, and just over half of black Caribbean boys at the age of 14 have a reading age of seven or below.

That is spectacularly implausible, so I went searching for the source.  I found a report titled Wasted published by The Centre for Policy Studies on 27th November 2009, written by the same Harriet Sergeant. (The CPS was founded by Keith Joseph and Margaret Thatcher and describes itself as "one of Britain's leading think tanks".)  The report tells us on page 10:

That looks like the same statistic, but with a much vaguer description of the underperformance.  But reading on to page 51 (ok, I admit, I didn't actually read it all) we find:

The p10 statistic carries a citation, to "The Daily Mail, 13 August, 2007."  Citing the Daily Mail in a purportedly scholarly paper smacks of desperation, but I ploughed on.  To its credit, that newspaper maintains an on-line archive, in which I found this report on a Bow Group publication

So to the Bow Group (the Bow Group describes itself as "the oldest - and one of the most influential - centre-right Think-Tanks in Britain").  The statistic appears in a table in this document  by Chris Skidmore (then chairman of the Bow Group), written in August 2007.  The document cites this government spreadsheet which contains the same numbers (in "Table 9: Achievements at Key Stage 3 English at Level 5 and above in 2006, by ethnicity, eligibility for free school meals and gender").

Being eligible for free school meals means a child has a parent or carer in receipt of a govenment benefit paid to people on low incomes, so it is talking about the poorest children.  That is not the same as "working class":  57% of the population identifed themselves as working class in a 2007 British Social Attitudes survey, as reported by the BBC.  15% of the boys in the spreadsheet were eligible for free school meals.

So how did the mostly accurate statistic on page 10 of Harriet Sergeant's 2009 report turn into the tosh in her recent article?  Here's an article by her in the Guardian, published at the same time as her CPS report.


at the age of fourteen, 63% of white working class boys and 55% of black Caribbean boys has a reading age of seven or less

So even at the time she had the wrong statistic from page 51 in her mind.  Furthermore, this government website dated 22nd December 2009  links to the Wasted study and reports it as saying

I guess that whoever wrote that had their attention drawn to the juicy statistic by someone, very possible Ms Sergeant herself.  I speculate further that in an early version of Wasted the statistic was wrong both times it was used, and someone went through the paper checking the citations and corrected the version with the citation attached.  Either they didn't tell Harriet Sergeant, or they did and she forgot.

There's a clue in the 2007 Daily Mail article to how the confusion first arose: the article starts with a selection of eye-catching statistics, including "at 14, one in five boys has a reading ability of a pupil half his age".  I speculate that this got mixed up from in Harriet Sergeant's mind with the 63% statistic from further down the article.

This statistic has appeared in the Guardian, in Prospect magazine, in the Spectator, and in the last few days in The Telegraph and in a Dominic Lawson article in The Independent.  And it's completely wrong.

Update: repeating my internet searches, I've found this article by Clive Power, casting doubt on various points in the Spectator article, starting with the one investigated here.
Posted by PaulB at 14:11 2 comments:

Here's a chart I made of UK income tax rates in the current year for a person with no special allowances: 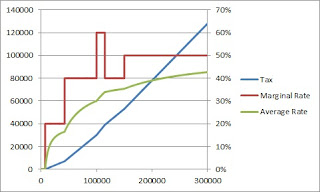 The 60% rate at £100,000 appears because the "Personal Allowance" - the zero rate band for low incomes - is progressively withdrawn for incomes above that level.  This was Alistair Darling's idea to get more money out of higher earners without increasing headline tax rates.  George Osborne evinced no pain in adopting the scheme.

This chart includes Class 1 National Insurance payments also - they are levied on employees on a weekly rather than an annual basis: I've assumed full-time employment. 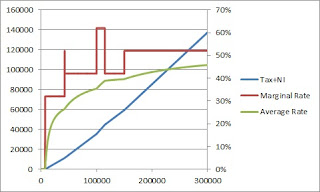 There's another blip in the graph at an annual income of £42,475 where the 40% tax band starts, because the lower National Insurance rate (2% instead of 12%) starts at a slightly higher level.

In a rational world, we would abandon the artificial distinction between Income Tax and National Insurance.  We would determine an appropriate shape for the marginal tax curve - preferably piecewise linear and non-decreasing.  And we would apply a multiplier to the curve to raise what revenue the government deems appropriate.

Tough on the Causes of Riots

I hate arbitrary destruction.  But Tony Blair's sound-bite about crime summarizes a rational approach to the riots.

Which is just by way of preamble to some well-deserved mockery, of Theresa May for the completely wrong prediction in her remarks to a police conference nearly a year ago "The British public simply don't resort to violent unrest in the face of challenging economic circumstances", and of Nick Cohen writing in The Observer two days ago "No Riots Here", for his spectacularly poor timing.

What's gone wrong with the economy

The simple answers, along the lines of "the bankers did it" are wrong.  The highly technical answers are confusing at best.  So here's my attempt at making sense of it.

1) The global economy is in an unstable state.  Firstly because the USA has been running a large negative trade balance since the late 90s (so has the UK).  Obviously this can't go on forever, and the longer it runs for the more strained the system becomes.  And secondly because the concept have having independent countries sharing a currency - the Euro - can work only if there's a sufficient degree of economic convergence between them.  The Maastricht Criteria were designed to ensure that would be the case, but they haven't proved sufficient, even for countries which, unlike Greece, didn't lie about having met them.

2) The USA (and UK) enjoyed strong growth for ten years up to the banking crisis (with a blip when the internet bubble burst).  This growth was fuelled by a credit boom - bankers found new ways, such as mortgage-backed bonds, to recirculate money.  Under some measures, this was an increase in the money supply, under others it was an increase in the velocity of circulation of money, but either way it gave us more money to spend.  Monetarists, looking at the Equation of Exchange, will tell you that that will encourage inflation, but instead the Chinese (and others) kept prices down by selling us more stuff cheaper.  See (1).

3) The banking crisis brought the credit boom to an abrupt halt.  Governments could compensate for it by increasing the money supply - Quantitative Easing - but they haven't done it on anything like the scale that would be necessary.  It takes courage they haven't got to take such unprecedented steps, but it took none to sit back smugly while the credit boom raged and the good times rolled.
Posted by PaulB at 22:08 No comments:

The US politicians put together a last-minute agreement, but S&P has rightly downgraded their the US credit rating anyway - a rating of AAA means not just that you can pay your debts but also that you will pay your debts.

However, in the short to medium term I expect this downgrade to have little or no effect on US bond yields.  Why should it?  The arguments for selling US bonds apply more powerfully to US equities, and if you sell equities (as the market has been doing with some vigour) you have to put the money somewhere.

Incidentally, I think the share sell-off has got more to do with European government debt than the USA's.  Some European countries are not going to be able to pay.
Posted by PaulB at 00:44 No comments: