Matt Ridley has attracted some attention with his article in the Wall Street Journal Cooling Down the Fears of Climate Change.  It's not a balanced presentation - for example he repeats the factoid that "global temperatures are no higher than they were 16 years ago" without mentioning that the two warmest years on record were 2005 and 2010.  But the main interest is his account of some work by Nic Lewis, not yet published as a scientific paper, but available on climate-dissenting blogs.  Lewis uses an energy balance method introduced ten years ago by Gregory et al. to get a median climate sensitivity of 1.62K, with a 5%-95% confidence interval of 1.03‑2.83K. That is he predicts that a doubling of atmospheric carbon dioxide should lead to an global average temperature increase of 1.62 degrees, with considerable uncertainty around that number.

The idea behind the method is that in equilibrium, there's a balance between radiation losses from the earth, and the radiation it absorbs from the sun.  When something happens to disturb this balance - a forcing - the earth's surface temperature has to change to compensate - radiation increases with temperature.  However, it will take some time for the earth to heat up (or cool down) to reach that temperature, in the meantime there will be a heat uptake which must be included in the calculation if one wants to use current data to estimate an equilibrium effect.  One selects two time periods as far apart as practicable, takes an estimate of changes in the various forcings, subtracts an estimate of changes in heat uptake, and divides by the resulting temperature change to get the sensitivity to net forcing.  Then one scales the result to the estimated change in forcing for a doubling of atmospheric carbon dioxide.

Lewis acknowledges in the comments under his article that this is estimating an Effective Climate Sensitivity rather than an Equilibrium Climate Sensitivity, but it's not clear to him or me why these should be much different (I could be wrong).

When Gregory tried this method, he got a median sensitivity of 6.1K, with a confidence interval stretching down to negative numbers 1.6 K and up to infinity - the method was interesting, but the results were useless did no more than establish a lower bound.  Lewis says he can do much better, taking his parameters mainly from the IPCC's draft of its forthcoming Fifth Assessment Report (AR5), which was recently leaked by a reviewer (anyone could sign up as a reviewer).

The report gives the IPCC's current estimate of sensitivity: I quote from page SPM-11 of the Executive Summary (the whole leaked report can conveniently be accessed on scribd)

I had a look at the parameters Lewis uses; one section in particular caught my eye, discussing the heat uptake parameter.  (OHU is Ocean Heat Uptake, SOD is Second Order Draft - the leaked version.)  To make it easier to read I've omitted the error analysis:


I estimate 2002–2011 OHU from a regression over 2002–2011 of 0–2000m pentadal ocean heat content estimate...the trend equates to 0.433 W/m², averaged over the Earth's surface...There is no alternative to using GCM-derived estimates of OHU for the 1871–1880 period, since there were no measurements then. I adopt the OHU estimate given in [Gregory 02] for the bracketing 1861–1900 period of 0.16 W/m², but deduct only 50% of it to compensate for the Levitus et al. (2012) regression trend implying a somewhat lower 2002-2011 OHU than is given in the SOD...That implies a change in OHU of 0.353 W/m²... Although Gregory 02 ignored non-ocean heat uptake, some allowance should be made for that and also for any increase in ocean heat content below 3000 m. The (slightly garbled) information in Section 3.2.5 of the SOD implies that 0–3000 m ocean warming accounts for 80–85% of the Earth's total heat uptake... Allowing for all components of the Earth's heat uptake implies an estimated change in total heat uptake of 0.43 W/m²...Natural variability in decadal OHU should be the counterpart of natural variability in decadal global surface temperature, so is not accounted for separately.

The bit about deducting only 50% of the uptake in the reference period is hard to understand, and it's odd that he refers to the SOD value without specifying what it is.  And Lewis doesn't say a word about disagreeing with SOD on this.  So I went and looked up what SOD has to say.  The relevant section is Box 3.1 on page 3-11 of Chapter 3:

It's also easy to convert from watts to watts per square metre, taken over the whole of the earth's surface, by dividing by the earth's surface area.  That gives 0.42 W m–2 as the average rate for 1971-2010, very close to Lewis's figure.  But he ought to be using a figure for 2002-2011, and the rate has increased sharply during the period - I reproduce the chart from page 3-66 of SOD Chapter 3 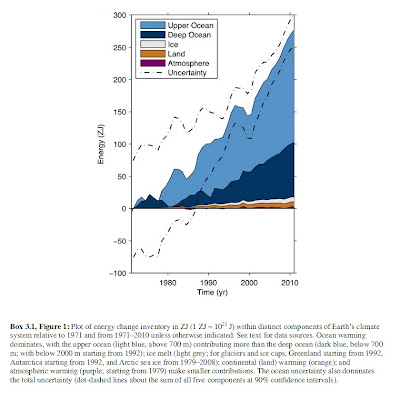 Reading off the chart, I estimate heat uptake in the last 10 years to have been 113 ZJ, corresponding to 0.70 W m-2. Subtracting the whole (rather than half) of estimated uptake in the reference period, and redoing the calculation using the rest of Lewis's numbers unchanged, I get a median sensitivity of 1.74 K instead of 1.62 K.

My guess is that Lewis has tended to choose parameters which nudge his estimate downwards, and has been somewhat optimistic in his error estimates.  But even with consensus parameters, this method will produce a significantly lower median estimate than the IPCC's.  It seems worth seeking to understand why.


I think a lot of what Nic Lewis says seems reasonable, though I also suspect that some of his choices will have served to underestimate sensitivity somewhat. Don't forget, "the ipcc" does no research to estimate sensitivity, they only summarise the literature which generally lags the latest evidence.