The BBC, in an article about AIDS funding, lists the ten leading causes of death in high, middle, and low-income countries.  It seems that about 2% of global mortality is due to "hypersensitive heart disease".  I think it's rather tactless of the BBC to say so - mightn't it hurt the poor darling's feelings?

This isn't spelling correction software doing its worst - "turberculosis" is also on the list.

But this is a serious subject, so on a more serious note: why won't the BBC link to its sources?  The data come from this WHO report (the WHO gets the names of the diseases right).  There's a list of countries by income group on page 170 here: the list is derived from a World Bank spreadsheet.

Update: The BBC has deleted the list.  Here's a screenshot: 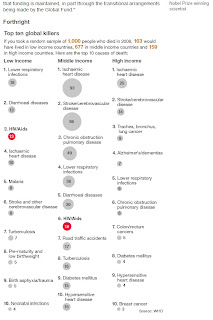