Could a Financial Transactions Tax in Europe avert major falls in equity markets?  I'm going to consider this in the light of major equity index falls working backwards from now. 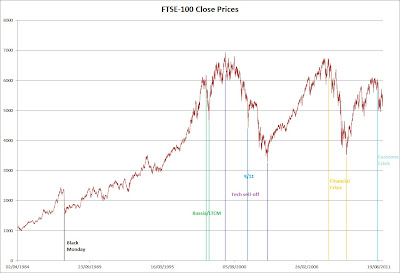 1) The Eurozone debt crisis sell-off starting in July 2011.
Between 7th July and 24th November this year the FTSE fell by 14.6% in reaction to the Eurozone debt crisis.  Its hard to see how an FTT on shares could have had much of an effect on that.  It's possible that an FTT on bonds (which is also part of the proposal) could have slightly reduced the falls in sovereign bond prices, but the underlying problem is the massive deficit and debt problems of several Euro countries.  (I've put an end date to the sell off at the recent market low, but I'm not promising the decline in equity prices is over.)

2) The Flash Crash of 6th May 2010.
Starting at about 2:40pm on the east coast, the S&P and other major indexes fell about 5% over 5 minutes, then recovered their losses over the next 10 minutes.  The exact causes are not definitely known, but it's certain that high-frequency trading played an important part.  It's probable that the crash wouldn't have happened had there been an FTT in the US.

However, the temporary crash had no effect on European markets, which were closed.  Had the crash occurred earlier in the day, there would have been some reaction in Europe, which would have been smaller with an FTT than without.  There's no way to quantify this.

3) The Financial Crisis sell-off between October 2007 and March 2009.
Between the end of October 2007 and 3rd March 2009 the FTSE lost 47.7% of its peak value.  This was one effect of a global financial crisis caused by the collapse of a credit boom built on the back of rising US house prices.  Banks had built up extraordinary levels of exposure to mortgage-backed securities, but an FTT would have affected this not at all.

4) 9/11
The FTSE fell 5.72% on 11th September 2001, in reaction to terrorist attacks in New York.  This was the only one of the ten biggest one-day percentage falls not to have happened in either October 1987 or during 2008.  The fall was a rational response to the information then available about the attacks (which occurred during the European afternoon).  An FTT would have been irrelevant.

5) The collapse of the tech bubble at the beginning of the third millennium
After reaching a new high on the last trading day of the century, the FTSE fell progressively, reaching a low on  12th March 2003, by which time it had lost 52.6% of its peak value.  A lot happens in three years, but the simple explanation is that there was a gradual re-evaluation of the true value of the internet market.  An FTT would have no bearing on this.

6) The Russian Financial crisis and the collapse of LTCM, July-October 1998
Between 20th July and 8th October 1998 the FTSE fell by 24% as a result of a financial crisis in Russia and in a reaction to the (not unrelated) failure of the hedge fund Long-Term Capital Management on 23rd September.  The market recovered the LTCM part of its losses over the following eight days as it became apparent that the damage had been contained.

It would probably have been impossible for LTCM to have executed its strategies in the presence of an FTT in the USA, so its boom and bust never would have happened.  An FTT in Europe would have made little difference to it.  So an FTT in the USA could have averted the last 6.6% of the fall.

The causes of this one were complex.  The losses on the 19th seem to have been accelerated by program trading and portfolio insurance strategies in the US.  It's possible that an FTT would have discouraged the development of these strategies.

It's not surprising that an FTT would have more effect in the USA.  For regulatory reasons, most share trading in the USA is done on (electronic) exchanges, which makes automated trading much more profitable.  In Europe, similar exchanges exist but most large share trades are OTC (over-the-counter).

While writing this, I came across this BBC analysis which covers many of the same events (without reference to a Financial Transactions Tax).
Posted by PaulB at 00:33