What next for Italy?

A week ago I wrote about what might happen next in Greece, and suggested that Italy had similar problems.  That was hardly an original view then, and in the seven days since it's become the consensus, as Italian government bond yield spreads have widened.

It seems to me that the consensus view is reading too much into what has in fact been a quite small market move.  Have a look at this chart of German and Italian government bond yields (data from Bloomberg): 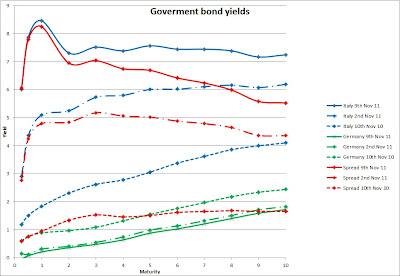 Italian government yields have widened to the extent that if Italy has to roll its maturing debt at these rates over the next year it will not be able to afford the interest payments.    But this is by no means game over.  Because if the market were convinced that Italian was going to default, yields would be much higher already.  Rather, the market yields are a weighted average of the default scenario and scenarios in which Italy gets rescued and yields come in.

It's possible to convert the Italian yield spread over Germany into an implied default probability, subject to various caveats.  Here's the chart: 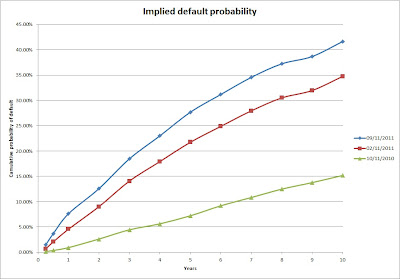 The caveats are:
- these probabilities assume the bonds are worth zero if Italy defaults.  In practice, the recovery rate might be 50%.  If so, the default probabilities are doubled.
- to do this properly, I should have stripped the discounted coupon value out of the bond prices to get zero-coupon yields.  But you're not paying me enough.  It won't make a huge difference.
- I've interpreted the spread as being entirely due to default risk.  But some of it is a liquidity premium.  In so far as the spread represents liquidity premium not default risk, the true default probability is reduced.  Because of the default risk, LCH.Clearnet, the bond and repo clearing house, has increased its margin requirments for Italian bonds, as it did previously for Greek, Irish and Portuguese bonds.  These margin requirements make it less attractive to hold the bonds, so prices are lower and yields are higher.  The margin rules for LCH.Clearnet Ltd are fairly clear, so this was a foreseeable risk which will already have been affecting bond yields to some extent a week ago.  LCH.Clearnet SA follows its own procedures: no one is surprised that it too has increased its margins, albeit by less.
- I've assumed zero default risk for German government bonds.  It may be that their default risk is in a sense slightly negative, in that there's a faint possibility that Germany will leave the Euro in favour of a new Deutschmark, which would presumably appreciate against the Euro.  (The 3-month Bubill yield in the first chart is very slightly negative: something odd is being priced in.)

Despite the caveats, the probabilities are not meaningless.  The bond markets think it possible but rather unlikely that Italy will default in the next year or so.

So why is default unlikely?  What could happen to save Italy?

One possibility is an emergency move towards financial integration in the Eurozone.  Merkel and Sarkozy have spoken before about the desirability of such integration, but in terms that suggest that they see this as something to be developed over the next few years.  What would be needed would be the creation within a few months of a mechanism which in effect meant that Germany ran the economies of the southern Eurozone countries, in exchange for paying their debts.  This would be a logical development of the EU and Euro projects, but politically it seems highly unlikely to be achievable.

A more plausible suggestion is that the ECB could buy enough Italian bonds to reduce yields to the point that the market decides that Italy can afford the interest payments.  It's already been doing this to some extent: it keeps the details confidential but it may be holding €100bn of Italian bonds.  It would need to buy several times as much to keep Italy's problems under control.  Since Germany is not going to pay for it, the only way I can see to fund that would be by Quantitative Easing - the electronic creation of the money required.  The obvious obstacle to doing this is the ECB's charter, established by EU treaty, which stipulates that its Primary Objective is to maintain price stability.  The ECB has interpreted this objective as meaning that consumer prices should not be allowed to rise by more than 2% per year, whereas the rate of increase of the HICP (Harmonized Index of Consumer Prices) in the Eurozone is currently approaching 3%.  The treaty agreement can't quickly be changed, but the inflation objective can perhaps be tacitly overlooked.  This would have to be done quietly enough for German public opinion not to be outraged, while the bond purchase scheme would have to be overt enough to reassure the markets.  Despite the difficulties, I think this is the horse the bond markets are cautiously backing.  And they are not afraid that the implied QE would be inflationary, judging by the falling yields on German debt.

There's also a hope that China might help: the EFSF has already asked.  The truth is that China doesn't like Europe enough to do this just to oblige.  But if an ECB buying programme appears to be reassuring the markets, the Chinese might well join in, in the hope of both earning themselves favours and making a profitable investment.


Since I mentioned my earlier post about the problems of Greece, I should acknowledge that my prediction about the referendum was wrong: I didn't know enough about Greek politics to foresee the possibility that Evangelos Venizelos would recover from his conveniently timed illness and kibosh the whole thing.  Still, I was right that Greece would reluctantly accept the bail-out plan.
Posted by PaulB at 20:40