The Greeks invented δημοκρατια, so it would be presumptuous of me to tell them they shouldn't have a referendum on the bail-out package.  Papandreou's unexpected (notwithstanding this story from September) decision to hold the vote is very bad news for the rest of the Eurozone, at least in the short term, but perhaps he's trying to do what's best for Greece.  It's not hard to see advantages.

First, imposing further austerity without a referendum might well result in a complete breakdown of social order, whereas if the Greeks decide reluctantly to endorse the bailout plan it's much more likely that they will co-operate in rebuilding the economy.  And if the vote looks close (no one is expecting a resounding 'yes') perhaps Merkel will find a way to sweeten the package a little.

Second, it's not clear that default is not the better option.  The package doesn't do that much to reduce Greek debt - only private banks are accepting a haircut.  And Greece's interest burden is going to increase as it rolls maturing debt into new, higher interest borrowing.  This chart (using IMF data) of governments' annual deficit as a percentage of GDP is interesting: 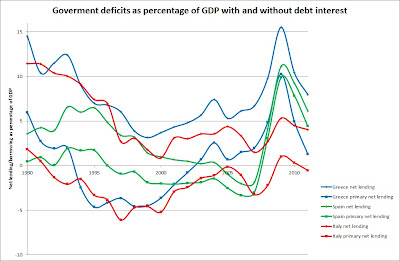 (The 2011 numbers are projected by the IMF: I've trusted those but ignored the projections it offers out to 2016.)

Greece's large deficit is now almost entirely due to paying debt interest.  If it defaulted it would be not very far off balancing its budget.

However, defaulting would be a painful business.  After a default, Greece would have no choice but to run a balanced budget at once, because no one would lend it anything.  And since a reported 30% of Greek government debt is held by Greek banks, the Greek banking system would fail catastrophically unless the government chose to bail it out, using money it hasn't got.  The only way I can see to save the banks would be to leave the euro and use electronically created drachmas.  This shouldn't in itself be inflationary since this money is not going to circulate, but the drachma would quickly depreciate and imported goods would get very expensive.

Which raises the question of whether default and leaving the euro are effectively the same thing, as the French in particular are saying.  There's no mechanism in the Maastricht Treaty for Greece to secede from the Eurozone or to be expelled from it, but Greece remains a sovereign state and can do what it wants within its own borders.  Since Greece needs control of its currency to handle the results of a default, and since the rest of the Eurozone doesn't seem to want it if it defaults, it seems certain that a way would be found for Greece to leave.

It's not even clear that Greece can avoid default for long enough to hold a referendum, since the Eurogroup is threatening not to deliver bailout money until the Greeks have made their minds up.  I suppose that once a referendum date is set, for the earliest possible date, enough money will be reluctantly trickled in to meet interest payments, if absolutely necessary.

How do the other PIGS compare?  None is in as much trouble, but Italy is the most similar - it would have no Government deficit at all if it didn't have to pay interest.  What's more, it has a lot of debt maturing in 2012.  And its debt in Euros is about five times what Greece owes: Germany is not going to put its hand in its pocket to sort it out.  It's not surprising the markets are scared.  Spain on the other hand has a deficit problem not a debt problem: there's no good reason for it to default.  But Portugal might be tempted.  Ireland is in a class of its own: since it got itself into trouble with its quixotic determination to honour its banks' debts, it's not likely to try to get itself out of trouble by reneging on its own debts.

My guess is that the Greeks will be scared into voting yes.  Papandreou has submitted to a serious ear-bashing from the French, so he must think that's a possible outcome.  But I'm not at all confident.
Posted by PaulB at 00:49