I mentioned a fortnight ago that I was going to investigate a possible relationship between the regional distribution of bowel cancer incidence in the UK and of sunlight.  And so I have.

I've chosen to work with incidence rather than mortality, because the incidence numbers are larger and hence less affected by random variation, and because it seems to me that sunlight is more likely to affect incidence than outcome.

The hypothesis is that sunlight is linked to bowel cancer incidence because exposure to ultraviolet light promotes synthesis of vitamin D, which has a protective effect.  It's the UVB (higher energy UV) component of the light that's important for vitamin D synthesis, and the process is not linear.  However, for a first pass at least, I've used data I could quite easily get online, which is sunlight incidence from this site, intended for use in solar energy calculations (I told it I'd use horizontal panels).  For each district I queried for one or more population centres, averaging the results if necessary.  The solar incidences I found varied from 2.14kWhr/m^2, averaged over the whole year, in Shetland, to  3.00 in Kingsbridge, Devon. 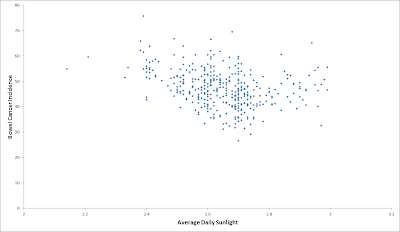 Here's a scatter plot of the data.  I've used a non-zero intercept on the sunlight axis.  I've resisted the temptation to let Excel draw a regression line.

It looks as if there might be something there.  I calculated a population-weighted correlation: the result is -0.300 .  To check for significance I tried shuffling the sunlight data so that the numbers were applied at random to the districts, recalculating the correlation each time.  In 1000 tries none of the correlations where anywhere near that large: there may be a lot of perturbations that would give that much correlation, but they're a tiny fraction of the 380! available.

However, this is an in-sample test - I've used the same data to form the hypothesis and to test it.  To avoid that, I tried ignoring the eleven labelled points I looked at when I came up with the notion.  The population-weight correlation was reduced to -0.256 .  This is still larger than anything I got in 1000 shuffles of the data (the largest therein being -0.199).  I conclude that there is a genuine negative correlation in the UK between bowel cancer incidence and sunlight.

Correlation does not prove causation - I suppose I would have got a similar result if I'd looked at latitude instead of sunlight, and one could attribute that to lifestyle differences between different parts of the country.  , But more rigorous analyses in the USA and Japan have found a negative correlation of bowel-cancer mortality with sunlight even after correcting for dietary differences.

Population-weighted linear regression gives a regression slope of -15.34, i.e. the best guess is that an increase in solar incidence of 1kWhr/m^2 reduces bowel cancer incidence by about 15 per 100,000 people.  To give an indication of the potential effect, I worked out the effect of applying an adjustment in each district as if every district had the solar incidence of the sunniest.  That would reduce bowel cancer incidence by 4298 cases per year.  If the ratio of mortality to incidence were maintained (research suggests sunlight might in fact improve survival) that would save 1742 lives per year.

I am not proposing that we promote climate change to allow more sunlight through the atmosphere.  But it might be possible to encourage people to expose themselves to sunlight more (not of course neglecting its dangers: there were 2067 deaths from malignant melanoma in the UK in 2008), or dietary vitamin D might have a similar effect (the data are suggestive but unclear).
Posted by PaulB at 13:40