If you've already read more than you want to about colorectal cancer, please look away now. 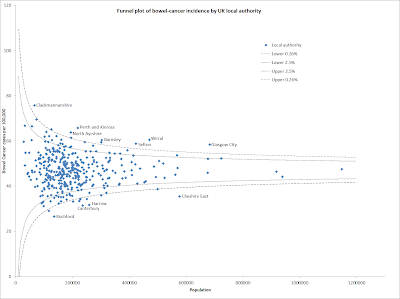 This chart is a funnel plot of incidence (i.e. new cases) rather than mortality.  It shows that there is significant variation from one district to another - there are several points outside the dashed lines.

It would be a mistake to deduce from this and the previous analysis that incidence depends on where you are but mortality doesn't.  We didn't prove the null hypothesis for mortality, we just failed to disprove it (outside Glasgow).  But it's easier to get statistically significant results for incidence, because the numbers are larger.  Strangely, the best evidence that mortality varies with district may be in the incidence numbers not the mortality numbers.

However, the data are for diagnosed incidence, not for the (unknown) total incidence.  Starting a screening programme will cause a jump in diagnoses, which will mostly but not entirely fall off with time - in the absence of screening, some people with bowel cancer may live out their lives without being diagnosed, and die of something else.  So for example the high incidence of diagnoses in Wirral in 2008 may be more to do with the start of a screening programme in 2007 than with a high total incidence.

I note that all the points well above the upper dashed line lie in the north of the UK, and all but one of the points well below the lower dashed line lie in the south of the UK.  I asked an oncologist, who told me that bowel cancer is known to be negatively correlated with sunlight, more so than any other cancer.  I'll try to show to what extent this factor is explanatory.  Meanwhile, here's a US map, generated on this site, of the sort that was first used to generate the sunlight hypothesis. 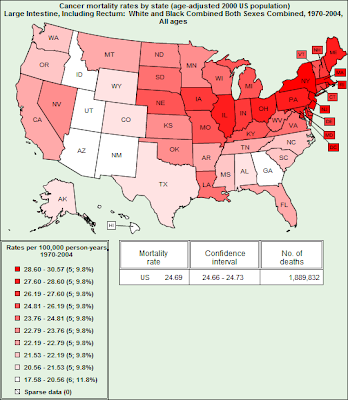