Few people start with a careful study of statistical data before forming a view about the desirability of the death penalty for murder.  Proponents are looking for a fitting punishment, opponents are against killing people, or unwilling to risk executing the innocent, or (me) think that the operation of the death penalty is damaging to the body politic.  However, I suppose that many opponents would, however reluctantly, change their minds if it could be shown that the death penalty saves many people from being murdered - I'd be unwilling to put my own sense of what is fitting ahead of the lives of innocents.  Similarly, I hope that many proponents would be willing to give up on retributive justice if it could be shown that it results in more people being murdered, perhaps by legitimizing killing in the minds of potential murderers.  So statistical data do matter.

In the USA, capital punishment was suspended between 1972 and 1976, as a result of Supreme Court decisions against and for it, and subsequently restored piecemeal.  Currently, 32 States have an active death penalty statute, applied with various degrees of enthusiasm.  This would seem to provide much data for statistical investigation of the effect of the death penalty on the murder rate, but results have been disappointingly inconsistent.  This paper explores the modelling issues involved: I reproduce its chart showing the lives that would be saved or lost per additional execution, averaged across states, according to twenty different choices of model. 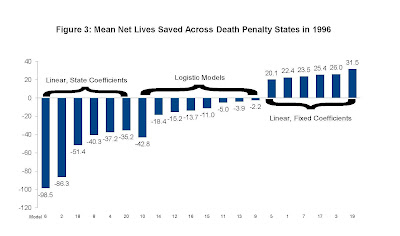 One approach is to study the competing models and decide which one likes best on its merits.  But few have got the time and knowledge of statistics to do that.  Even for those who have, the result will be a personal opinion of little use for persuading others - a more common approach for public discussion is to select the study which gives results which suit one's case.

I have a proposal.  The USA should abolish the death penalty for everyone whose date of birth is on an even day of the month.  (Date of birth as officially recorded as of the date of they commit murder.)  If the deterrent effect of the death penalty is important, we should soon see a disparity in murder rate between the odds and the evens.  There might be other effects - from legitimizing arbitrary killing, or, in the other direction, from having fewer executions to remind potential killers of the punishment they risk - but we would at least find out how big the deterrent effect is.

Perhaps the Supreme Court would disallow this under the Equal Protection Clause of the Fourteenth Amendment:


No State shall make or enforce any law which shall abridge the privileges or immunities of citizens of the United States; nor shall any State deprive any person of life, liberty, or property, without due process of law; nor deny to any person within its jurisdiction the equal protection of the laws.

But it would take them a few years to get round to it, so we'd get some data anyway.