Cormac Hollingsworth has a piece on Left Foot Forward in which he complains that Financial Services Bill doesn't do enough to give the Bank of England the information it needs to regulate the market.  He recommends in particular an amendment "that includes important extensions to improving the transparency of the UK’s commodities markets, to make public for the first time the true level of risk taking".

Hollingsworth is concerned in particular about pension-fund investments in commodities, "facilitated by a financial innovation, the Commodity Index Fund, invented by Goldman Sachs in the 1990s using the same financial technology of swaps that gave us the synthetic CDOs that sold sub-prime mortgages round the world" (I'm struggling to think of two financial products more dissimilar than the GSCI and a synthetic CDO).  He points out - in bold text - that when banks sell these products "they take no risk, take a fee and pass on the risks to their customers".  Does he mean that the reason it's important to highlight the "true level of risk taking" by the banks is that it's not high enough?

The question Hollingsworth most wants answered is "why is it that for the past year, UK oil prices – the Brent oil price – has been 10.7p a litre higher than the equivalent American traded oil price?".  I'm not an expert on the oil market, so to help understand the issue I downloaded some oil price data from here (the equivalent US benchmark to Brent Crude is WTI - West Texas Intermediate) , FX rates from here, looked up how many litres there are in a barrel, and drew this chart: 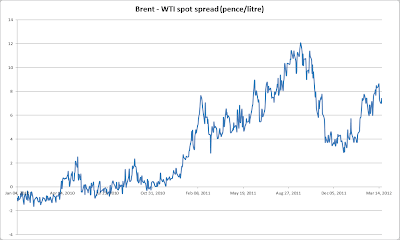 Certainly the price difference is large for two commodities with very similar intrinsic value.  But I don't think it can reasonably be said that it's been 10.7p/litre for the past year. 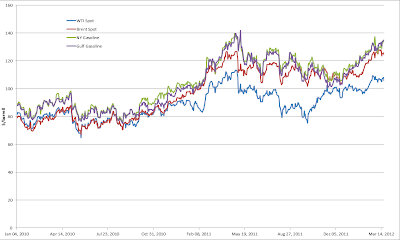 There's little difference between NY and Gulf gasoline prices, and both are typically a little more expensive than Brent Crude (refining costs something).  What stands out is that as WTI falls below Brent, gasoline prices show no sign of tracking it.  WTI benchmark crude is not a major raw material in the production of gasoline for the major US markets, and most US consumers and businesses are getting little or no advantage from its relative cheapness.  (But retail prices are much lower in the US than in Europe because taxes are much lower.)

What's actually happening is that the WTI crude benchmark is taken from the price in Cushing, Oklahoma.  And the way things are currently set up it's much easier to get oil to Cushing than to get it out.  So there's a glut there and the market is depressed.  As a pricing benchmark, it's broken.  As Tim Worstall points out, one can get the gist of this from Wikipedia.

I do know something about Commodity Indexes*.  Investors buy them because they think commodity prices, and especially oil prices, will go up as demand increasingly exceeds supply.  The Index managers buy commodity futures, which is what the indexes track.  That pushes up the futures price, so that the Brent market was pushed into 'contango' - the forward price higher than the spot price - for nearly three years up to the end of October last year.  This encouraged arbitrageurs to buy oil and sell oil futures against it, pushing up spot oil prices.

So traders have responded to the expectation of future oil shortages by storing oil for future use.  That makes oil for immediate use more expensive.  In other words, we're saving some of a limited resource for the future when we expect to need it.  Why would anyone be opposed to that?

Incidentally, the chart illustrates the absurdity of blaming the US president for high gasoline prices, as opposition speakers - currently Republican presidential candidates - are wont to do.  The president does not control global oil prices, and no amount of drilling or pipeline construction in the USA is likely to change that.  The deeply unattractive Newt Gingrich in particular promises if elected to reduce prices to $2.50 per US gallon, compared with the present level of about $3.85, which is just over a dollar a litre.  He's lying.


*This blog does not offer specific investment advice.  But if you're thinking of putting money into a Commodity Index, find out how its rules instruct it to roll from one future to the next as time passes, and to what extent that allows arbitrageurs to make profits at its expense.
Posted by PaulB at 12:39