The TUC published a report this week The Great Wages Grab - how your pay has fallen behind for thirty years.  The report tells us that the wage share of GDP has fallen from about 59% thirty years ago to about 55% now. It adds that because of rising inequality the average worker's pay has fallen as a share of total wages (by which I think it means that the proportional gap between median and mean pay has increased).  Combining these two factors, it finds that the "average worker" is £7,000 a year worse off than they would be if the proportions had stayed constant since 1980.

The report has been welcomed by Brendan Barber and Richard Murphy, who add that increasing wages is the way to encourage growth.  Think Left agrees with them.  Seamus Milne uses the data to bolster his case for more powerful Trade Unions.  Tim Worstall in contrast is vehemently opposed to the wage share analysis: he points out repeatedly that the corporate profit share of GDP has not risen as the wage share has fallen, as the TUC implies when it says


The three decades when deregulation ruled may have been good for profits and fine for the wealthy, but the benefits did not trickle down to pay packets.


...this is another one of those fake statistics that will be bandied around the political arena for years to come. And it’s one that needs to be killed...

Worstall is supported by data supplied by Britmouse, who remarks that


I think Tim is correct to note the (slight) rise in other income (which includes income from self-employment, so-called “mixed income”) and VAT are the significant secular trend.

For my part, I agree that looking at the wage share of GDP is not very meaningful.  I think we can do better. But first, a note on what the data represent.  They come (I think, and Britmouse says so too) from data produced by the Office of National Statistics giving the breakdown of UK GDP according to the income approach:

COE: Compensation of Employees of corporations (including public sector employers); includes employers' national insurance contributions (as well as employees' national insurance and income tax)
GOS: Gross operating Surplus, roughly the gross profits of incorporated businesses after paying employees
GMI: Gross mixed income, the money that goes to non-incorporated businesses (partnerships and self-employed)
T-S: Taxes less subsidies on production and imports, the difference due to money going to the government between what it costs to get stuff to market plus profits on it, and what it sells for.  This includes VAT and duties, but not income tax. 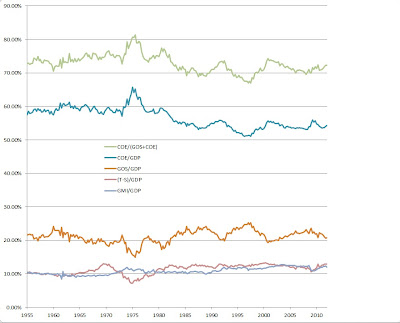 COE/GDP is the line the TUC has plotted, the three lines below it are as in Britmouse's chart, but I have added the top line, which is employees' compensation as a proportion of gross corporate income (I downloaded my data here).  It shows that compensation has fallen over thirty years from about 76% to about 72% of corporate income.  So the TUC has got a point.  However, this fall had happened by 1983 - it all occurred in Thatcher's first term; I recall that the TUC was unhappy at the time.

It's interesting to look at how things changed between between 1979 and 1983.  The fall in COE as a proportion of GDP went into increasing GOS and T-S.  The increasing tax take came from an increase in VAT from 8% to 15%.  Using this money, Corporation tax was cut, so companies got to keep a larger share of GOS, and income tax was cut but National Insurance was increased, so that a typical worker got to keep a slightly larger share of COE (higher earners did better).

Since 1983, the main shift has been a modest transfer of GDP from the corporate to the non-corporate sectors.  I suppose this arises from an increasing tendency to outsource work to contractors rather than engage permanent staff.  If a worker is paid similarly either way, then this is just an artefact of the way the statistics are compiled.

So does all this represent an unfair change - a "wages grab"?  If you take money out of the corporate sector by means of taxes on production, and use it to cut income tax, it seems fair for wages to adjust downwards to compensate.  On the other hand, if you use it to cut corporation tax, it seems fair for gross corporate profits to adjust downwards.  Looking at the changes from 1979-1983 only, it does seem that corporations benefited at the expense of employees.  This I think is what the government intended: it must be gratifying for them that the shift seems to have persisted.  If you take the view that the increased net profitability of corporations has encouraged growth and made us all richer, you will quietly applaud.  If you disagree with that, then you will see it as something to be reversed.

The TUC's other contention is that the average worker's wage has fallen as a share of total wages.  I'll have a look at the data in another post.
Posted by PaulB at 09:48